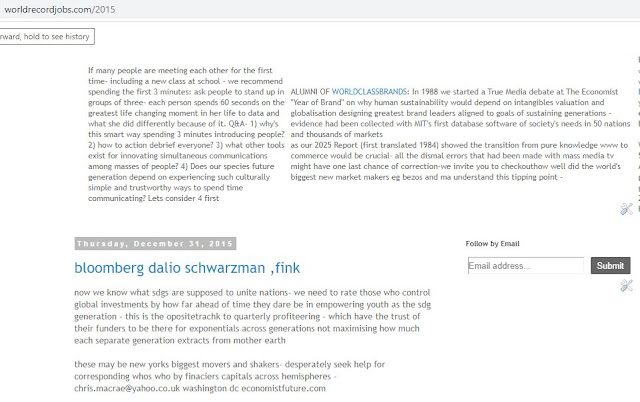 Posted by chris macrae at 5:48 AM No comments:

Is there a better way? For the first time this year, Americans will be able to fill out the census online. This risks missing hard-to-reach groups such as indigenous populations and the old. It also introduces unforeseen headaches. In 2016 Australia’s census website crashed, leaving millions unable to submit their responses and venting their anger with the hashtag #censusfail.
Nordic countries have ditched the unwieldy undertaking altogether, turning to other sources of information. In Sweden each citizen is given a personnummer, an identity number linked to government data on individuals’ health, employment, residence and more. These data are cross-referenced to produce statistics resembling the results of a traditional census. Denmark, Finland and Norway take the same approach. As societies share more information, wittingly or otherwise, new statistics can be produced. Mobile-phone records, for example, have been used to estimate commuting patterns. The Netherlands, meanwhile, conducts what it calls a “virtual” census. This is similar to the Nordic model, but also uses small-sample surveys to produce data not already held by the state, such as education levels and occupation.
As long as each citizen has a unique identifier, such counts are cheaper to carry out—the Dutch government boasts that its census in 2011 cost just $0.10 per person—and can be done much more regularly. But the accuracy of the data is harder to guarantee. Population registers are never completely up to date and anyone not already on them will be missed. In Europe, two-thirds of countries are expected to use data from existing registers to some extent in the next round of censuses. This is up from just a quarter 20 years ago, according to analysis by Paolo Valente, a statistician at the UN.
Making such a change is a slow process. Bernard Baffour, a researcher at the Australian National University, points out that it took decades for Sweden to implement a fully register-based census, partly because Swedes had to be reassured that their data were secure. As he puts it, “When a doctor asks how much you drink or smoke, are you happy for that to be linked with all the other information on you?” Frank de Zwart, a professor at Leiden University in the Netherlands, also criticises register-based censuses for neglecting a key political function of censuses. For minorities such as native Americans, filling out a census is a powerful assertion of their place in society. A virtual census would deny them this opportunity. That said, self-reporting is far from perfect: 177,000 Britons implausibly claimed to be Jedi knights in the census of 2011.
Even though Britain does not have identity cards, common in the rest of Europe, in 2013 the government tried to replace the census with other administrative data it already held. An outcry from MPs and statisticians forced ministers to shelve the idea. The public had rejected an attempt in 2006 to introduce identity cards, and recent scandals such as the harvesting of personal data from Facebook deepened Britons’ worries about privacy. Iain Bell, the statistician in charge of the census at the Office for National Statistics (ONS), emphasises the importance of public trust in producing official figures: “If people don’t want a single register of the population, we have to respect that and look to other sources.” Francis Maude, then a government minister, told MPs in 2014 that he hoped the next census, due to take place next year, would be the last. In 2023, the ONS will report back on whether this is achievable.
Political rows over America’s census have shone a light on a function of government that most people consider only a handful of times over their lives, but the results of which affect them every day. Recording each member of every household seems outdated in the age of big data, whether the data are held by governments or private companies. But in this sense, at least, America’s federal government is not big enough; its social-security system is too incomplete, and other information still too patchy, to replace the old-fashioned head-count. Will Mr Dillingham be the last enumerator to visit Toksook Bay? Don’t count on it.
Posted by chris macrae at 8:52 PM 1 comment:

Posted by chris macrae at 7:06 AM No comments:

He poured his heart into people’s welfare

in any event the dream now of sdg youth depends on brac u choosing asian world partners vienna choosing europe partners and bard-soros-botstein choosing american world partners- ideally a discussion with schwarzman and mit as epicentre of schwarzman AI, brac digital finance and everyones bottom up health care brigham womens would be hosted and carried forward through dutch royal families to climate celebrations of gca.org rotterdam october cop26 glasgow nov- and hopefully a window of opportunity as both usa and europe decide where next nov 2019

in branding terms the clintons discovery of yunus in late 80s unleashed microcredit student clubs the world over when they needed to be fazle abed or brac clubs.. that remains the sdg freedom of action as well as american-english's freedom of speech challenge in all of the worlds biggest universities today

He poured his heart into people’s welfare

Diplomatic Correspondent
People’s welfare was the mainstay in all the activities of Sir Fazle Hasan Abed and this drove him to excel in all the ventures of Brac throughout his life, eminent educationists and development experts said yesterday.
Abed’s diverse activities have contributed to alleviating poverty, improving health dynamism, and promoting education and human rights of millions of people at home and abroad, they said.
They also said Abed had set up strong institutions and adopted policies to make sure that the progress made through them is sustainable, which has now become a global example of development.
The speakers made the comments at a discussion, titled “Sir Abed in education: His thoughts, ideology and achievements”. Arranged by Gyantapas Abdur Razzaq Foundation at Dhaka University’s Muzaffar Ahmed Chowdhury Auditorium, the programme was held in memory of the Brac founder, who passed away at a city hospital on December 20.

From left, Dr Salehuddin Ahmed, the first pro-vice chancellor of Brac university; Dr Hossain Zillur Rahman, chairperson of Brac governing body; Prof Rehman Sobhan, chairman of Centre for Policy Dialogue (CPD); National Professor Jamilur Reza Choudhury; Rasheda K Choudhury, executive director, Campaign for Popular Education (CAMPE); and Prof Manzoor Ahmed, founding director of BRAC University Institute of Educational Development, observe a minute of silence in the memory of Brac founder Sir Fazle Hasan Abed at a programme at Dhaka university’s Muzaffar Ahmed Chowdhury Auditorium yesterday. Sir Fazle Abed passed away at a city hospital on December 20. Photo: Star
Brac, founded by Abed in 1972 at the age of 36 as a small relief and rehabilitation project in north-eastern Bangladesh, has grown to be one of the most effective non-governmental organisations in the world, touching the lives of over many hundreds of millions of people worldwide.
It is a unique organisation specialised in development programmes, microfinance, and social enterprises. It also has a university, a bank and a range of mission-aligned investments. Currently, Brac operates in 11 countries in Asia and Africa, with affiliate offices in the USA, the UK and the Netherlands.
Behind all these initiatives was a great vision held by Abed, the speakers said yesterday.
Centre for Policy Dialogue Chairman Prof Rehman Sobhan said Abed was a rare personality with a vision and the ability to implement it successfully.
“Sir Fazle Abed was a man of action,” he said.
He also said starting its journey at a remote village, Brac has gone global and it continues to bring about economic and social changes in people’s lives. “Brac’s distinct feature is that it has established institutions that have self-financed programmes.”
He added that the NGO took up programmes for the poor people, helped them engage in income-generating activities and overcome poverty.
Dr Hossain Zillur Rahman, chairperson of Brac governing body, said, “Whatever Sir Fazle Abed thought and did was about the welfare of the common people. He designed all his programmes accordingly.”
In the 1980s when Abed visited villages and found women having six to seven children and high rate of child mortality, he picked up the idea on how to reduce the number of child deaths, ensure rural education and make sure women can have a dignified life, said Zillur.
That’s how the non-formal education of children and health programmes began, he said.
“He always attached importance to building strong institutions and efficient management to make sure that the development made is sustainable … he made changes as per the needs of the day,” Zillur said.
Dr Salehuddin Ahmed, the first pro-vice chancellor of Brac University, said all the initiatives undertaken by Brac were based on rigorous studies. And Sir Fazle Abed, who had a special quality of listening deeply to the people and interact with them, would learn from anybody and everybody.
Some 30 lakh children going to the Brac’s primary and pre-primary schools means something great, he said.
Dr Manzoor Ahmed, founder-director of the Institute of Educational Development, Brac University, said Abed had realised that development cannot happen without good education. So he put emphasis on education.
Apart from working to ensure primary and pre-primary education, Brac also established a university, he said, adding that the NGO has made significant contributions to achieving Bangladesh’s Millennium Development Goals.
Rasheda K Choudhury, executive director of the Campaign for Popular Education, said she has long experience of closely working with Sir Fazle Abed in the education sector, and Abed was a guiding light for her.
Recalling an event, she said a study on primary schools in rural areas in 2000 found that only 18 percent students of class five had basic competency level. A question arose how they could make such a finding public.
Abed then suggested conducting a study with the same parameters on the top 10 schools in Dhaka city. They did it and found 70 percent students of class five had the basic competency level. “We then made it a comparative study and brought it to the public,” she said.
“On the deathbed, Sir Fazle Abed told me that there are many challenges in the education sector, don’t give up … keep working,” Rasheda said.
Prof Jamilur Reza Choudhury, the first vice chancellor of Brac University, said Abed established the university, considering that it would have a long legacy.
Lauding Abed’s wisdom, he said, “Whatever he did, he got advice from the best brains of the world.”
Gyantapas Abdur Razzaq Foundation Director General Ahrar Ahmad said the discussion was not to mourn the death of Sir Fazle Abed, but to celebrate his life and activities.
“He [Abed] was a visionary. His thoughts on education are unique. A man of his stature had always been polite and soft voiced. He never demonstrated his authority,” he added.
Yesterday’s discussion was attended by students, academics and development activists.
Posted by chris macrae at 7:05 AM No comments: