Posted by chris macrae at 6:28 AM No comments:

WHAT WOULD BE MY FAVORITE WAY TO SPEND TIME ON THE METAVERSE?

- each has a sustainability concern; listen to humans sharing that concern; curates them to action spaces where they can practice solutions to their hearts content - safely, communally, joyfully, me-too which ever minority you have previousky been cast in - in march new yo9rkers at the 15th annual cafe begun at the UN's foundation stine in the btonx reviewed zbee collaboration plans; on march30 we engaged the 1000 colege chat, in april i will ask von neumman's daughter if Zbee's metaverse fits with her AI Hall of Fame- but more to the point where can we zoom up to your communities? chris.macrae@yahoo.co.uk

WHERE DOES MY ATTRACTION TO ZBEE COME FROM

70   years ago my father Norman heard of an interesting puzzle to mediate - what will leaders do with 100 times more tech every decade? Being a disgrumtled scot whose experience as a teenager navigator in world war 2 (allied bombers burma campaign) my father thought it was worthwhile spending his life askingt this question (out of the economist). Glasgows engines of power and telecoms had ended up in world wars led by white men - origin Europe, Land Grab USA, mindset English Admin. What would 100 times more tech do to children and grandchildren of his gereation.

Dad took a half term break in his 60 years of seaeching Neumann's query. He and I wrote 2025trport in 1984 - we did not know if sustainabiliy's deadline was 2025 or 2030 bur we did map out happy (human common se3nse advancibg) uses of each decade? Our book was designed so that destruction of 2020s by covid climate and putin/stalin (ideology) were 3 of the risks we beings timed how to get rid of. But ultimately it all depended on such intangible exponentials as will media celebrate the most trustworthy and will teachers and students be free to search. My father believed that choosing which covebtional wisdoms to overturn when was the duty of journalists for humanity, Ais last 20 years of Annual Surveys coined the genre Entrepreneurial Revolution.

Posted by chris macrae at 5:24 AM No comments:

Posted by chris macrae at 5:03 AM No comments:

please rsvp with your fav LEAN IN story

lean in example - kopp; beyond lean in - ho --- please rsvp chris.macrae@yahoo.co.uk
Posted by chris macrae at 12:38 PM No comments:

au revoir to world's 2 biggest hopes -why not you be the 3rd?

here are the 2 most practical-hopeful people that I have ever been privileged to meet and listen to - who's your greatest hope now brothers paul and fazle left us feb2022 and dec 2019?

what if preventing extinction now depends on action learning curricula of 10 most loving humans? inconveniently in 1984 i co-authored 2025report arguing sustainability depending on changing education systems- then i was only 60% confident as a statistician now we have data to be 95% confident- this does  not mean we know all of the 10 most different 10 to learn from though 2 have just died since dec 2020-others need to be headhunted eg can the Un headhunt pope francis please and make sure every operational division connects its AI with franciscan human1? if Biden doesnt want to help advance that he should resign -sorry the last president of any western nation that millennials could have gained most from was JFK - what did he mean by us interdependence; why is he the only world leader in technology's moores lay decades to have given the next generation a decade long goal (moon race) - half of humans are under 30 and their generation has mots to gain or lose- can we please design womensverse.net to vote for which under 30s woman the world can learn from 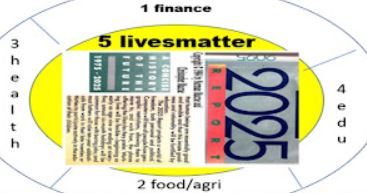 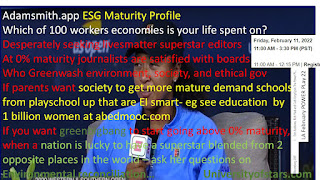 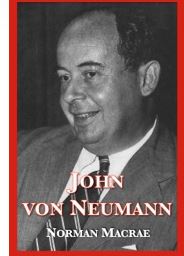 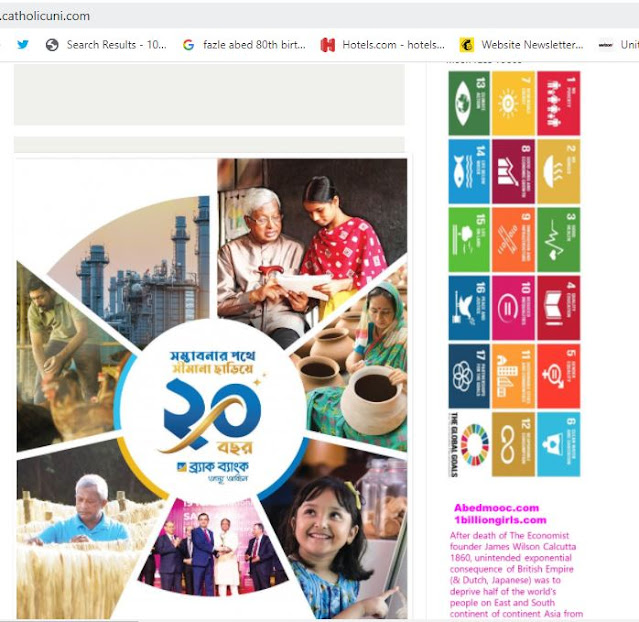 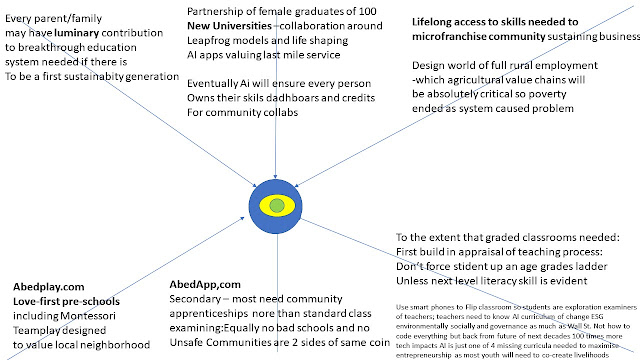 In overview, this nonlinear system evolved like this. From 1972, Abed found himself responsible for designing village business micro franchises and training illiterate village mothers -initially up to 15000 mothers in a meta village of 100000 people which Abed had built with his live savings. Micro franchises could change the whole of aid if the entrepreneurial and education challenge could be met profitably operate priorities such as supplying rice to end starvation distributing basic medicines: preventing unnecessary deaths of infants and mothers was the priority purpose of these business. At www.economistbangla.com we aim to list 50 microfranchises that Abed helped design over 50 years – they are mainly to do with health and all dynamics of rural : 1 life saving food security, 2 rural crafts (Aarong was a skills network begun by Abed’s wife Ayesha) etc creating income trades with citizens, 3rd being a worldwide collaboration epicentre on forestry and other climate adaptability solutions the rural half of humanity can contribute as millennials are first generation to leave a zero footprint.

Over the next 15 years further education of village mothers included practice of oral rehydration nationwide; doing vaccination half of all mothers households.

4.2 After 15 years the second educational focus of brac became designing and training teachers for 40000 primary schools and then pre-schools. All the curricula were printed by brac. By 2010, Brac’s first 25 years of educating 10 million children in Bangladesh

4.3 Brac tried to keep linkingin any graduates of its primary system. Teenage skills has been a missing area of worldwide aid right up to 2015. However where it could brac developed scholarships for secondary and increasingly it partnered libraries and community centres in peer to peer training of teenage girls. Pretty much any skill that female entrepreneurs can make a living can be matched with a brac training a brac training module

4.4 At a millennium goal party it is rumored Mrs Steve Jobs first asked abed why are brac solutions not served worldwide. In the late 1990s villages were only just beginning to be connected by mobile and solar so Abed was extremely busy with digitalisi8ng brac’s Bangladesh operations but by starting brac university 2001 he reasoned he could both link researchers who wanted to learn in Bangladesh and start designing some worldwide solutions. Nationally the goal would be to become the best university during the rest of his lifetime; globally he hoped to connect dozens of new university partnerships in line with the fact that brac across all its service domains was becoming the worlds largest NGO partnership. From the get-go brac university was the destination of global researchers of cholera, oral rehydration and related diseases – college name  JP Grant school of public health. Its second global worldwide hub would become the MA in playschool design with partners such as Lego foundation and quite soon the world bank as well as all un agencies concerned with refugee children. Extraordinarily it was as late as 2010s that annual summits started celebrating education laureates. Abed became a core knowledge collaborator with Asia’s 2 most impactful summits -wise led by Qatar’s first lady in association with her girls university campus and a parallel summit WISH celebrating last mile health services. Yidan Prize an luminaries out of Hong Kong – now the life long pursuit of former TenCent founder Charles Yidan

4.5 Early learning playschools was the first global focus of abed- he believed this was a missing opportunity everywhere and this also matched solutions for refugee education that5 were multiplying in urgency

4.6 The idea of Educational Luminaries can be thought of as Charles Yihan’s legacy gift to Abed though it also mimics his life’s joy of making partnerships in education in every practice area – especially the primary sdgs: food health, building 100000 person live maters communities, financial services for the previously unbanked. Yidan is well placed to choose edtech luminaries: with the Naumann AI Hall of Fame pilot surveys, and out of eg Stanford as connectors of everything else that non linear 21st c education partnerships need to COLLAB & celebrate if todays youth are to be the first sdg generation.

Posted by chris macrae at 8:36 PM No comments:

873 guests invited
4 march 2021  youtube
from archives of abedplay.com
Posted by chris macrae at 5:50 PM No comments:

Dear Director Brac Sir Fazle's biggest collaboration. Thanks to Japan Ambassador to Dhaka who liked dad's and The Economist's views of Asia Rising from 1860! (James Wilson's wish) --, from 2007 i got the chance to take graduate journalists on 16 trips to Dhaka mainly to listed to Sir Fazle's biggest wish. This was to design university collaborations to maximise any millennial graduates actioning of 50 years of women empowerment and relevance to 2020s resolving sdgs and ESG. Do you or team member have time to meet to discuss whether this objective is on track? I will be in New York quite often helping mediate www.teachforsdgs.com &  www.universityofstars.com chris wash dc +1 240 316 8157 Sir Fazle was very clear about celebrating his wish with Shameran.

Posted by chris macrae at 5:18 AM No comments:

Posted by chris macrae at 12:39 PM No comments:

Join us in piloting AI Hall of Fame -who's who helping millennials be Sustainability Gen?

HFAI4 In Geneva, Schwab’s World Economic Forum vocabulary of IR3, IR4 in my view is the legacy of all Von Neumann tech to 2020s. (whereas IR1.2 is how smith and watt's engines compounded unequally to 1939 became humanity’s second last chance which Neumann gave so much to.

And when Japan staged G20 in 2019 it converged Schwab jargon this to society 5.0 and it added a deep data agenda Osaka Track (probably because the Japanese wanted to map back for hosting the wo0rdl expo in Osaka 2025 not directly debate Trump in 2019 when their Reiwa era was only a few months old https://en.wikipedia.org/wiki/Reiwa   )

HFAI5 Asia has one distinctive view of AI that I love. It wants AI to be education-led not advertising financed. I could myself never work with Zuckerberg (in fact I guest edited triple issue of journal of marketing management on every compound risk of 20th fake media- to the extent that I have a professional focus as a MA in statistics from DAMPT - that is it)

Overall: My feeling is the UN timeline could be an ideal partner for a pilot report on AI Hall of Fame. It might shortlist say 50 HFAI candidates (from diverse parts of the world and the combinations of SDGs) with view to choosing 10 and explaining how they multiply trust across hemispheres or demographics. It would be vital that you both veto any nominations and add in your view of who's connecting world your father hoped millennials would enjoy. Ideally several of the first ten Hall of Fame members would be happy to do a ten minute podcast on what k-12 teachers should know about their AI for millennials.

Posted by chris macrae at 6:51 AM No comments:

haven't yet found anyone who wants to apply her fame more to sustain her whole generation - your nominations welcome chris.macrae@yahoo.co.uk 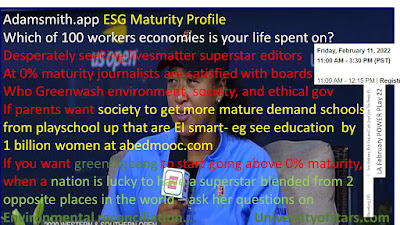